We review Red Coat Tavern’s “Brasserie Burger” and see if the Detroit-area staple lives up to its reputation.

While visiting family over the Thanksgiving holiday, I stopped in at Red Coat Tavern, in the Detroit suburb of Royal Oak. Red Coat Tavern is regularly hailed as serving one of the best burgers in Michigan. They have a great selection of toppings, and the Brasserie Burger is their signature combination.

The burger is a 1/2 pound patty topped with with gruyere, bacon, watercress, tomato, caramelized onions, and a Dijon mustard-mayonnaise. It’s served on a toasted brioche bun. I substituted out the caramelized onions for their “sauteed shrooms” (they were, as expected, of the non-hallucinogenic variety). In addition to the side of fries, I also ordered their hand-battered fried mushrooms.

The burger came a nice medium rare with a solid, but not extraordinary, crust. The beef itself was flavorful and savory. The bacon was exceptional: salty & chewy, bursting with flavor. The sauce was well balanced and paired well with the other flavors without being overpowering. Mustard can often be a dominant flavor that doesn’t “play well with others”, but that never happened with the dijon mustard-mayo sauce. The bun nicely toasted, a pleasant mix of crisp edges and a soft middle.

On the downside, the watercress didn’t add much. The tomato was average – juicy but not overly flavorful. It’s possible that was more a matter of it being November than anything else since vegetables often suffer in the Winter. The bun was nicely toasted and not overly dry. The cheese was too mild – I barely noticed it was there and it didn’t provide the necessary counterpoint to the strong bacon in terms of either flavor or texture.

The battered and fried mushrooms were very good. The mushrooms were earthy and umami, with a nice saltiness. The batter was slightly crispy and contrasted nicely with the soft, slightly chewy mushrooms. There was a good balance between the batter and the mushrooms in terms of the quantity of each – I never felt like I was just eating batter (which can sometimes happen with fried items). It came with two sauces, a ranch and a “cocktail”, and both were tangy – I ended up using both equally. 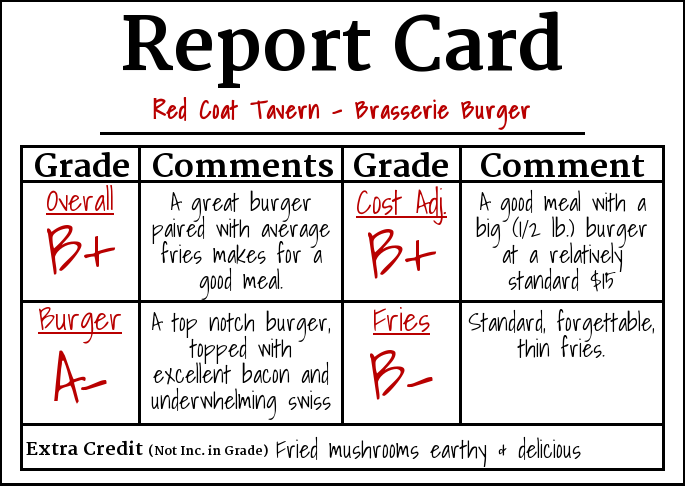