While visiting some of my dear friends in the Chicago, I had the pleasure of visiting Grange Hall Burger Bar on the city’s Near West Side. While there I had their Ultimate Burger, which is made with grassfed beef (as are all of their beef burgers), topped with Muenster cheese, applewood bacon, arugula, carmelized onions (which I had held back), and horseradish aioli. It comes on a toasted and buttered sesame seed bun.

I also ordered their Beer Cheese and Sausage fries, which come topped with a sharp cheddar beef sauce and andouille sausage (I held back the green onions that normally come on the dish), and their mixed fried veggies basket, which comes with beer battered asparagus, green beans, green peppers, mushrooms, and zucchini.

The burger came a perfect medium rare, with a great, loose mouth feel. Often a chef can over-handle grassfed beef while forming the patty, making it too chewy – the chefs at Grange Hall Burger Bar clearly try to avoid that. The bun was well buttered with the right mix of fluffiness and firmness. The butter and juiciness from the burger beautifully soak into the dry parts of the bun.

The bacon was salty and savory, though the burger could have used one more strip. The strips could also have been spread more evenly as well (as the photo shows, the bacon comes centered on the burger patty). The muenster cheese was smooth and earthy, with a firm feel in the mouth – partially because it was a bit undermelted. The arugula provided a nice tinge of spice and was crisp and fresh. The horseradish aoili, something I was looking forward to, was almost an afterthought; it definitely could have used more horseradish kick.

Without hyperbole, the Beer Cheese and Sausage fries were one of the greatest things I’ve ever eaten. Whoever put this dish together did an amazing job, it is an absolute flavor bomb. The cheese sauce clearly uses real cheddar and it’s wonderfully sharp and tangy. The sausage is smokey with a mild spice. The fries are big wedges of potato, with a crispy outside and a soft fluffy center. The edges are wonderfully carmelized, slightly chewy, and they have a hint of vinegar. The whole dish is a brilliant mix of savory, salty, spicy, and tangy with all the flavors in a complimentary balance.

After the great burger and the amazing fries, the veggie basket was a bit of a letdown. That’s really more about the excellence of the rest of the meal rather than a failing of the dish itself. The beer batter coating is crisp and doesn’t overwhelm the vegetables. You’re not just eating the batter and can tell the difference between each veggie. The basket comes with a tangy horseradish-based sauce that looks like the horseradish aioli on the burger (if it is, the horseradish comes through much more with the vegetables than the burger). The basket didn’t wow me, but rather delivered as promised. 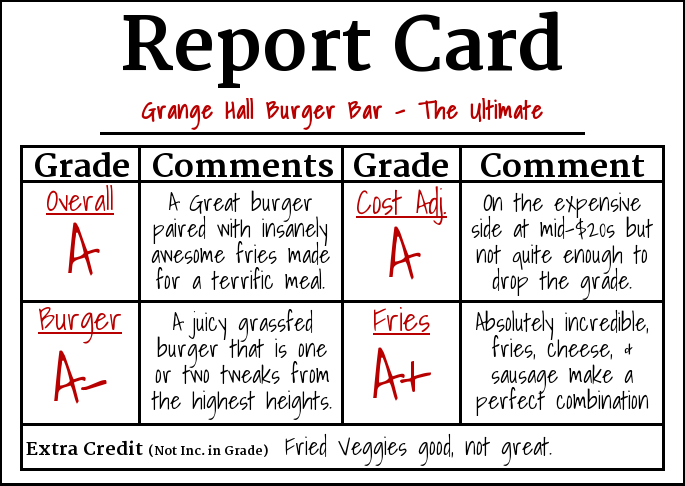